How to draw ears and place them correctly

Drawing ears may seem like a desperatly difficult thing to do to a beginner. The curvature of the ear seems like an impossible thing to grasp. The reason for that is that we are not really familiar with ears. When we are looking at someone’s face we don’t see their ears in their entirety. Ears are always close by, but rarely under serious inspection. Their curvature is abstract and the inexperienced draftsman has no idea where to begin when trying to draw it. My advice to inexperienced in is: „Start by drawing what you know.“( Sight is not a primary organ of sense, and what we don’t know we will never be able to see.) The most well known part of the ear is the earlobe, and we know about it because people tend to pirece it since time immemorial  in order to wear earrings. The other parts of the ear remain less known because we have no use for them. The only way to truly know them is through study of anatomy. Knowing anatomy thoroughly is the only way to make any part of the human body familiar to a painter. I often tell my students that when it comes to painting painting „familiar“ means „visible“ and that the parts of the body with which they are not „familiar“with they will not be able to see. And if you cannot see something -you will never be able to draw it. The parts of the ear that require attention are the following:

I usually draw the simplified schema of an ear in order to make it easier for the students to memorise its parts. I’ve noticed that the younger generations are aware of the existance of „tragus“, because much like the earlobe, it has become fashionable to pierce it. The ear parts come in pairs and „tragus“ has its pair (as the body parts often do) the elevation called „antitragus“. The name „tragus“ comes frome the greek word „tragos“ which means „goat“. I suppose „tragus“ got its name because sometimes men, especially if they are older, tend to have hair growing out of their „tragi“ which  thus resembles the beard of the billy-goat. The „helix“, outermost curve of the ear, has its pair in the „antihelix“. And the „earlobe“ remains single. 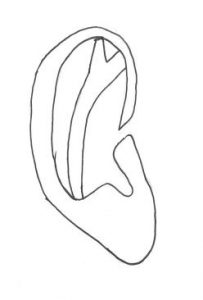 Once my students memorise the above mentioned ear parts and its shapes, they tend to stop having problems with drawing ears altogether. But, unfortunatly for all of us, the next problem arises: the ear placement on the head.( It could be argued that the placement of the ear should be taught before the actual ear shape and I agree. But in my expirience, the students shy from drawing the ear very much, beacuse it seems too complicated, that I can only motivate them to tackle the placement of the ear after they have gained some self-confidence by mastering the ear itself.) The academic proportional system places the ear between the root of the nose and the „glabella“. It’s necessary for my students to memorize that fact, because people actually rarely have their ears where the academics claim it should be. By  memorizing the academic rule the students speed up their process of observation, because they have a comparison against which they can measure the model. 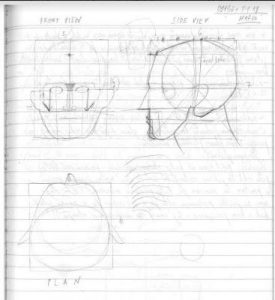 Placing the ear correctly in the profile is a bit more complicated than doing it in the „en face“ position, because the academic rules regulate the height of the ear on the head, but are ambiguous about placing the ear at the right distance from the back of the head. A mistake in ear placement can change the looks of correct proportions by making them look disfigured. The schemata bellow was taken from Edouard Lanteri’s fanatstic book „Modelling and Sculpting the Human Figure“ which I fanatically recommend. 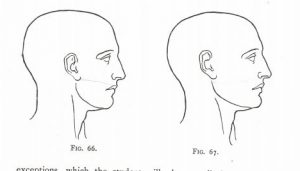 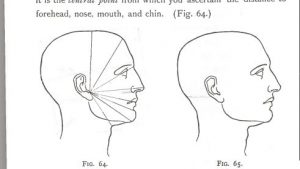 Head number 64 has all the correct proportions with the correctly positioned ear. The head next to it has exact same proportions as the head number 64, but the ear is placed too far back which makes the face loom large and the back of the head seems underdeveloped. In the head number 66 the ear is placed too close to the face which makes the face seem tiny. These are typical mistakes my students make which sometimes make them correct the proportions of the head obsessively all the while failing to notice that the problem was in the incorrect ear placement. In order to encourage my students while drawing and placing the ears in a portrait, I usually show them Van Gogh’s early self-portraits and ask them to pay attention to the position of the ears. 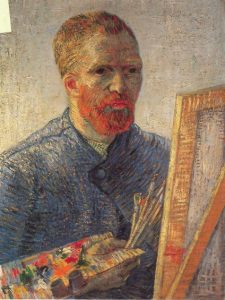 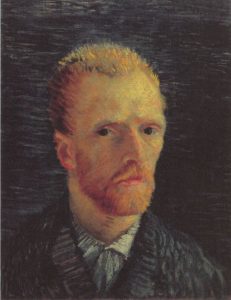