Why is the Shoulder Girdle the Most Difficult Thing to Draw

The last blog post delt with the bony structure of the shoulder girdle. This one is going to deal with the muscles which move the shoulder blade in all directions ( up and down and to the left or to the right) across the rib cage.

I have emphasized on many occasions that the only correct way to study anatomy is to understand the movement made by the body and then to try and find the location of the muscle supposedly performing the movement.

In accordance to the above mentioned principle, let’s consider the position of the muscle responsible for moving the shoulder blade forward on the rib cage. The muscle would have to be positioned in such a way that it is capable of pulling the shoulder blade forward. Considering the fact that the rib cage is ovoid in shape, the muscle would have to be able to pull it forward in a spyral-like fashion.

The muscle pulling the shoulder blade forward is positioned at the lower angle of the scapula and has its insertions into ribs 5 till 9. Its „tentacles“ start somewhere on the level of a male nipple and spyral around the rib cage. The muscle is called „serratus anterior“ and this is how it would look like in profile:

If we were to draw it from the front we would only be able to see its origin at the lower angle of the scapula.

Beginners often think that the „tentacles“ of the „serratus“ are actual ribs because its relief is clearly seen on the ribcage. „Serratus“ is especially well developed in boxers because it helps deliver the blow. Next time you watch the Klichko brothers boxing with some other huge naked man in te ring pay attention to the enormously developed „serratuses“. 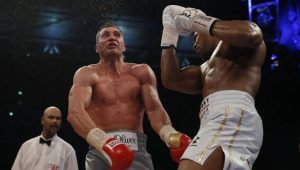 On the great photo above you can see Klitchko getting his butt kicked by Joshua, but we are not interested in that. We can see three beautiful “serratus” muscles on this photo: Klitchkos’ “serratuses” are visible on both sides of his rib cage on the level of his nipples. And Joshua’s left arm is lifted to reveal a well developed “serratus” with its’ oblique “fingers”- do not confuse them for ribs.
Now that we were able to meve the scapula forward we have to be able to move it back. Using the sam logic we applied while deducing the position of the „serratus“ , let’s try and figure out the position of the muscle responsible for pulling the scapula back where it started.

The muscle pulling the scapula towards the spine is called „rhomboideus“ and it originates on the inner side of the scapula and has its insertion in the tendon near the spine itself. When the shoulder blades approach one another, a bulge is formed between them and Hale calls it the „rhomboid“ bulge.